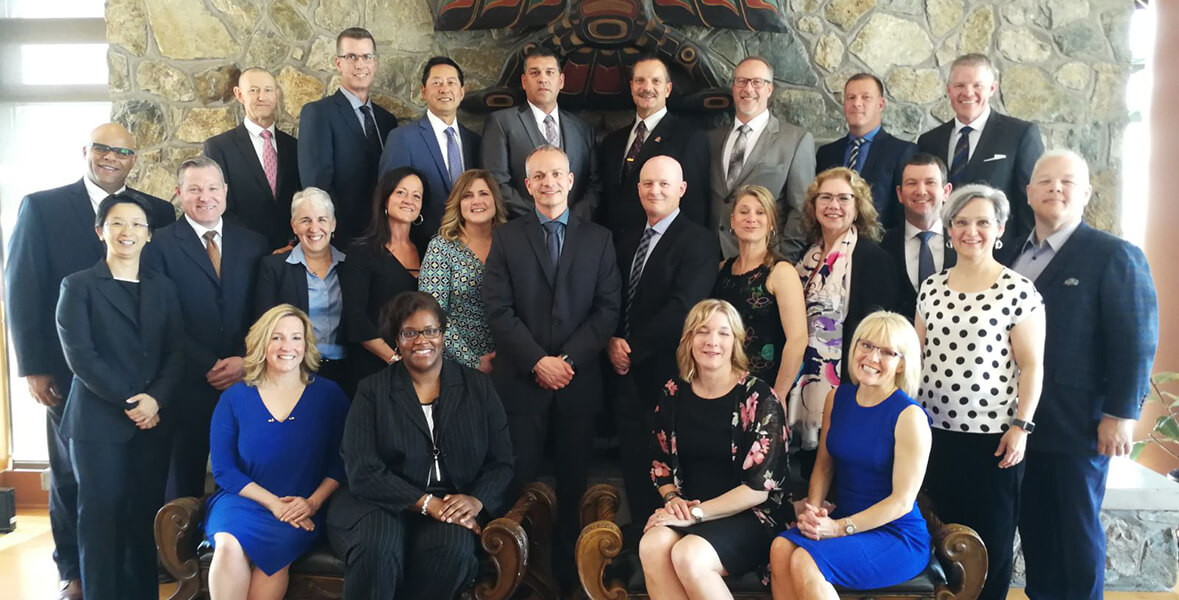 Esquimalt, BC, May 29, 2018 – The Canadian Police College congratulates the graduating class of the Executive Development in Policing (EDP) program. Twenty Canadian and one Australian students of the EDP 17 01 cohort recently graduated from the extensive one-year program designed for up-and-coming law enforcement senior executive leaders in Esquimalt, British Columbia on April 25, 2018.

This class included members from the Royal Canadian Mounted Police from across Canada, Ontario Provincial Police, as well as Lethbridge, Prince Albert, Saint John, Canadian National, Medicine Hat and one student representing the Australian Institute of Police Management (AIPM) from the Australian Federal Police. This program also enjoyed the compliment of three Invited Fellows, one representing the AIPM from New Zealand, one from Hong Kong and one from Ottawa.

Congratulations to the two Award recipients for this program. Superintendent Joanne Keeping from RCMP D Division was awarded the Student Excellence Award and Inspector Dana Earley from the Ontario Provincial Police was awarded the Strategic Change Project Award.

Students completed the four courses that were offered both online and in class. The program is a unique opportunity for members to come together to learn from each other and from senior police executives as well as from a carefully selected academics. In Ottawa, Ontario Provincial Police (OPP), Commissioner Vince Hawkes, Waterloo Regional Chief Bryan Larkin, and Retired Winnipeg Chief Devon Clunis, were among those who addressed the class and challenged their thinking and assumptions. In Esquimalt, Chief Dave Jones from New Westminster, Chief Bob Downie from Saanich and Deputy Chief Norm Lipinski from Delta Police were among those that talked directly to the graduates about today and tomorrow's police challenges.

The students explored many different facets of police executive leadership throughout the program with a particular focus on diversity and inclusiveness. This was particularly relevant for this group which had a good gender distribution of 43% women and 57% men. The class also enjoyed the unique brand of police leadership development with the AIPM Fellow who took them through the process of “Leading with Complexity” from theory to practice with the introduction of adaptive leadership complemented with the peer case consultation process.